Heads Up everyone! Learn how to identify the leek moth.

Life History of the Leek Moth

There are three flight periods of leek moth per season in Ontario. In Eastern Ontario, the insect can overwinter as an adult moth or as a pupa in various sheltered areas such as buildings, hedges and plant debris; field data collected in Ontario and Quebec have found the same. Adults become active and emerge in the spring, early April, when temperatures reach 9.5°C and mate shortly thereafter. Eggs are laid singly on lower leaf surfaces whenever night temperatures are above 10°C-12°C. Females lay up to 100 eggs over a 3-4-week period. When eggs hatch in approximately a week later, larvae enter leaves to mine tissues (leafminer stage). After several days, larvae move towards the centre of the plant where young leaves are formed. After several weeks of active feeding, larvae climb out onto foliage and spin their cocoons. Pupation lasts about 12 days, depending on weather conditions. Leek moth numbers and associated damage typically increase as the season progresses. 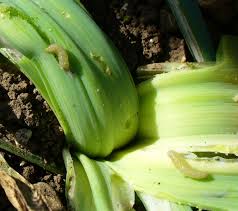 I find it best to start monitoring the garlic patch just before the scapes start to show way down in the in the middle of the plant.  I look for frass, the aftermath that the larvae leaves behind after chewing its way into the plant, I  will seek out  the larvae  and  squish it with my fingers, one gross larvae at a time.  It is best to get as many as you can in the first cycle in April/May in order to reduce the number of  larvae survival to adulthood and avoid as many  eggs laid in the second cycle.  One adult can lay up to 100 eggs!
OMAFRA publication from 2008 One of the first articles written by Jennifer Allen.
Agriculture and Agri-Food Canada, recent article on Leek Moth, 2014.. There are excellent photos of leek moths, larvae, damage and pupae on this website.

Tomato of your choice, and as much as you would like.
Chop into bite size pieces and place in a bowl.
Add crushed garlic, preferably a mild tasting garlic for raw eating, such as Italian, Korean, Railway Creek or German. Add as much as you would like! at least one clove per medium tomato.
Drizzle good olive or avocado oil over the tomatoes and salt to taste. Toss gently. Serve immediately.
That's it! So simple to achieve full flavour of summer sunshine in your mouth. 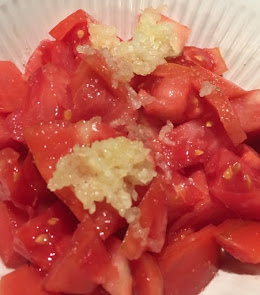 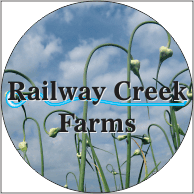 Our Garlic can be found in these stores and farmgates

To recieve the 'occasional' update of what's new in the garlic patch, please fill out the form below.

@railway.creek.farm garlic is growing at Granite Ridge Education Centre for the Green Industries Program by the Grade 11 and 12 students. Mandatory course for specialist high skills major in forestryAll proceeds of produce go to Sharbot Lake community food bank.Companion planting with cabbages to keep down cabbage moths.

Glad to hear you had a good growing season. I had a good year myself =). Some did better than others for sure but overall I was pleased. Last year I bought several kinds from you... the czech and hungarian did very well. The puslinch I got from you two years ago though is still my shining star. Anyway, I'd like to get one more variety from you this year.

Shortly after receiving the bulbs I sampled each variety sent and although I appreciated the flavor of each I really enjoyed the Railway Creek variety with its mild garlic flavor.

I felt obliged to send a photo of the garlic we picked up from you last October. The weedy looking row on the left is out of Sobey's - just look at the difference! Armenian and Polish (from Railway Creek Farm) seem to be the bully boys and are outgrowing everything. I'm having a blast watching it grow.

My favourite websites, check them out too!

Stay tuned in for Coming Events